The tokenization of different types of elements and assets is one of the possibilities, so to speak, that the introduction of blockchain technology beyond the realm of cryptocurrencies has brought to our business and industrial ecosystem.

“Tokenizing”, adapting the English voice “token” to our language, consists of creating a digital asset that represents that which we are working on in order to be able to divide it into many parts. Taking into account that, in a Smart City, a service or infrastructure cannot generally be physically divided, the best way to achieve this is to represent it with a token or digital asset that represents parts or portions of the system to be managed.

What is the point of tokenizing an element or service?

The purpose of this technological application is mainly to substantially increase the efficiency of the resources to be managed. For example, within the management of a smart city, one of the main components is the energy supply and its Smart Grid, the infrastructure that allows electricity to reach every corner of the city efficiently and optimally.

Current systems in their analog version have many losses and are inefficient, hence the gradual introduction of “smart” versions that correct some of these inefficiencies and improve energy distribution. However, and, going further, by applying blockchain technology to the management and distribution service of the smart grid, a solution can be developed that allows us to tokenize the energy supply of a Smart City to enable transactions to be carried out more quickly, efficiently and securely.

There have already been concrete examples of blockchain use in the energy sector. Japanese energy company Eneres has experimented with blockchain as a means of distributing electricity to around 1,000 households in the cities of Fukushima and Aizuwakamatsu, which are participating in trials that aim to share excess electricity. Power generated by solar and other generators will be passed on to the sources most in need, and so households producing surplus power will recycle this power to stabilize the grid, all managed through a blockchain network.

Eneres markets these exchanges by pooling households through a blockchain, effectively creating a “virtual power plant”. Throughout the trials, energy supply is controlled by “smart taps,” small 5 cm high and wide power strips that are distributed among participating households and collect data on how much electricity each one consumes.

Tokenizing the energy supply can have several advantages

Taking into account that the development and implementation of Smart Grids is already a reality in many of the main cities of the planet, going a step further and combining its distribution with a blockchain network allows us to achieve, for example:

To tokenize the energy supply of a Smart City it is necessary to use a blockchain such as Ethereum, which allows the creation of smart contracts that can be used to carry out energy transactions in an automated way. Smart contracts are computer programs that run on the blockchain and perform specific actions when certain conditions are met. In this process, basically, smart contracts would be created that allow consumers to buy and sell energy in an automated way, buying according to their consumption needs and selling surplus production to the grid when available. Consumers would be able to use tokens designated by the system to pay for energy, and the smart contract would handle the transaction and update each consumer’s balance in real time.

The next step is connecting the smart grid to the blockchain. As we have mentioned, a smart grid is a smart electrical network that enables energy management and control in a more efficient and sustainable way than its analog counterpart, as it allows to measure consumption reliably and to manage the energy exchange processes of the network throughout the city more securely.

Joining the Smart Grid to the blockchain is a relatively straightforward process, which starts with selecting a blockchain that meets the needs of the smart grid and is suitable for energy tokenization. Some options could be Ethereum, EOS or TRON. These blockchains being open source can be adapted to create an independent network for the Smart City, on which a smart contract would be created that defines the rules and conditions for the tokenization of energy in the smart grid. This smart contract should be written in a programming language compatible with the selected blockchain, Solidity in the case of Ethereum, for example.

Once the smart contract is created, tokens that will represent the units of energy in the smart grid should be issued. These tokens could be issued through an ICO (initial coin offering) process or through a direct sale to energy consumers, or through any mechanism accepted by the electricity supply distributors and marketers or as dictated by the city’s own energy management services if they are in charge of them. Once the tokens representing the units of energy to be exchanged have been issued and are available for trading, the next step is to integrate the energy meters with the blockchain. 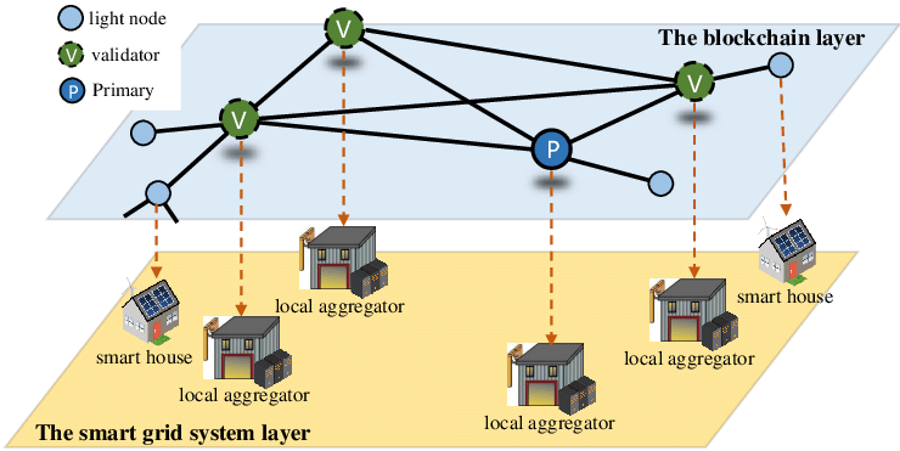 Thus, it is also necessary for smart meters, smart energy meters, to be integrated with the blockchain to enable automatic updating of each consumer’s balance in real time. This could be done by using IoT devices (meters) that send consumption data to the blockchain and record on the blockchain the consumption of each user in a secure and public way.

Finally, a third option is to use integration platforms as an intermediate solution to connect smart energy meters to the blockchain in a simple and efficient way. These centralized platforms, usually managed by the electricity market operators themselves, would offer the tools and services to facilitate the integration of different systems and technologies and would act as a bridge between the smart grid, the smart meters and the blockchain where consumption data, transactions and orders to buy and sell energy tokens would be stored.

Whether you opt for the solution of using IoT devices to broadcast data from smart meters or connecting them directly to the blockchain, the way to ensure that data is transmitted properly is to choose a communications technology that is secure and efficient. Since the market and options are diverse, this solution can be implemented using, for example:

The possibilities are enormous in the combined use of these new technologies within the Industry 4.0 paradigm and the benefits for smart city power supply management promise to empower their future use in more and more cities across our planet. As urban infrastructures and services that require greater efficiency in everything related to their management are consolidated, solutions such as blockchain and the tokenization of supplies such as energy are just one more step in optimizing the resources needed to make our cities sustainable and efficient in their processes.