The transformation of a city into a Smart City can only happen through technology. It may be a basic concept, but many residents of cities that are already quite advanced may not be aware that it is the innovations that have emerged under the umbrella of Industry 4.0 that are being used to improve the efficiency, quality of life and sustainability of their places of residence. To achieve this, a smart city needs this technology to be organized in a solid and well-planned technical infrastructure, composed of some “basic” blocks that form the cogs that are to make the city’s “smart” services work.

Sensors and IoT devices that monitor operation and capture data

One of the key pieces of the technical infrastructure of a smart city is the network of sensors and Internet of Things (IoT) devices. These sensors are the ones that collect and transmit data on traffic, weather, energy consumption, water or the status of garbage containers, among other aspects of the city. The data collected is used to optimize the use of resources and improve efficiency in areas such as transportation, waste management and emergency management.

There are thousands of companies dedicated exclusively to the world of IoT sensors, as a Smart City needs them by the tens of thousands in areas such as:

Then, these sensors must “talk” and “understand” each other to be able to send the collected data to the rest of the devices in the network, so they need certain communication protocols to do so. The most common standards used in IoT networks include:

The communications and data transmission network 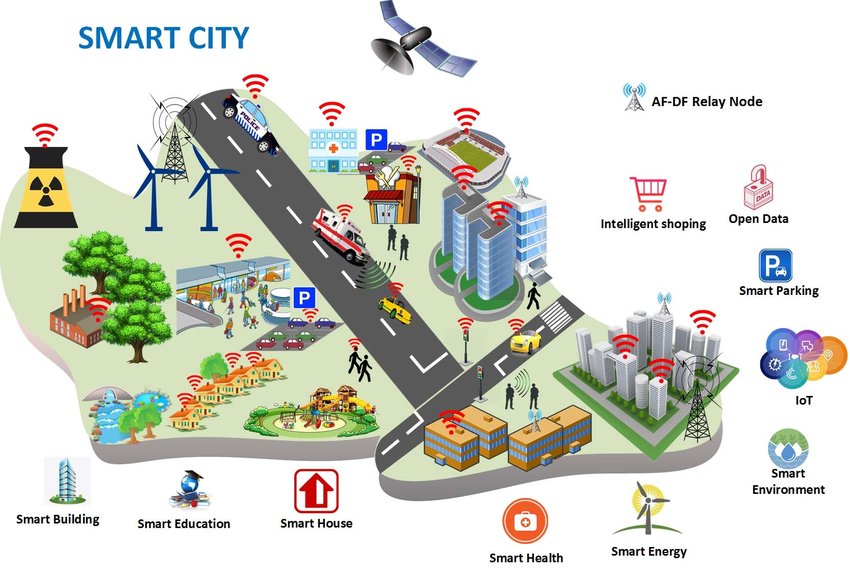 Thanks to all of the above, as the city sensor system collects data on those elements that are being monitored (traffic, electricity consumption, street lighting, status of garbage containers, air quality, etc.) the next important part of the technical infrastructure of the Smart City is a robust communications network that allows the transmission of all this, because, as we mentioned before, if the data that is collected is not sent to be analyzed it is of no use.

Most smart cities use wireless technologies such as 5G, LoRaWAN, Zigbee or Sigfox for this purpose. The latter, Sigfox, is a low-power, low-data-rate wireless communication technology that is mainly used to connect IoT devices to a network. It is used for data transmission in applications such as asset monitoring, vehicle tracking, industrial telemetry, building automation, fleet management, etc. The technology is based on two-way communication through Sigfox’s own network, which is used to transmit information from devices to a data platform in the cloud.

Then, in any city, the communications network must have a scalable and secure architecture to be able to adapt to the changing needs of the city and guarantee the privacy and security of the data transmitted.

Regarding the use of next-generation mobile communications, some cities and operators have opted to test Open RAN (Open Access Network), which is an approach to the architecture of telecommunications networks based on the use of components from different manufacturers, instead of using equipment from a single supplier. The aim is to achieve greater flexibility and scalability and to improve market competition by lowering costs. Open RAN is mainly used to improve efficiency in the use of network resources, reduce ownership costs and facilitate innovation in communications systems, as well as to improve the security and accessibility of networks in remote or low-resource areas.

Systems for processing data collected from the city 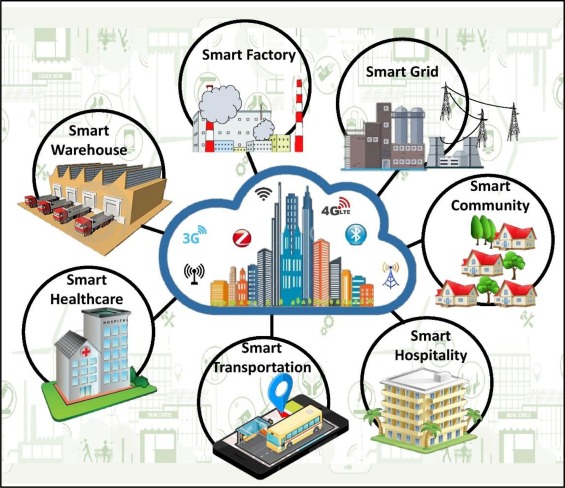 The third major block forming the technological infrastructure of a Smart City is a large-scale data processing system, essential for converting the data collected into useful information. This usually includes the use of artificial intelligence and machine learning technologies to analyze the data and make automated decisions in real time, with increasingly powerful tools appearing in the field of AI for this purpose.

Grouped by fields of action, there are several data processing systems used in a Smart City, some of them being:

Most of the data is processed and stored with cloud computing systems as a secure and scalable storage system is necessary to save and access the collected data over time. Therefore, in addition, it is also important to have a robust security system to protect them and avoid interruption of Smart City services.

Cloud computing systems work by providing a processing and storage infrastructure over the Internet. The data collected by sensors and IoT devices are transmitted over the network to a processing center in the cloud, to, once there, proceed to its analysis with big data tools. Generally, most cities use these tools to analyze patterns and trends in the collected data and to provide predictive analytics and automate decisions.

In addition, processing and storing city data in the cloud allows users and service managers to access it from anywhere and at any time, which facilitates real-time decision making. They also allow processing and storage to easily scale as needed to handle large amounts of data packets that are collected by sensors and IoT devices in an increasingly larger volumes in a smart city.

If the Smart City needs the previous blocks to be able to collect, transmit, process and analyze the operation of all its services, there is no point in creating all this infrastructure if security systems are not also installed in them. By security, we also mean cybersecurity, i.e. protection against hackers and attacks through the network. The installation of these systems in the Smart City structures is what protects data and tries to avoid the interruption of city services, and includes measures such as data encryption and device authentication, among many others.

Finally, a smart city would not be useful to citizens if it does not provide them with the data and tools to take advantage of all the services that their city provides, hence an intuitive user interface is essential to allow city dwellers to interact with the technology and access the services it offers. In most cities, this includes multiple mobile applications, interactive panels along the streets and other means of communication that make it easier for all of the above to have a real and practical use for all city residents.

Why do we want to turn cities into Smart Cities?

Perhaps a part of the population can ask themselves the same question. The answer is that the main objective of turning a city into a “smart city” is to improve the quality of life of citizens, in an increasingly urban society where the population of cities grows and grows without stopping, so it is important to make the city more efficient, sustainable and competitive, including, broadly speaking:

There are many elements and building blocks that allow the transformation of a city into its smart counterpart to take place. In the end, it is technology at the service of society, and as such, finding the best way to apply it and put it into practice is what defines the quality of life we will be able to lead in our cities.